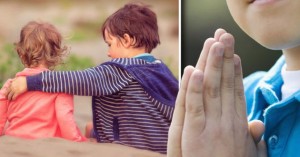 When it comes to teaching kids the Golden Rule, Sunday school might not be the best bet. A new study in the journal Current Biology found children in religious households are significantly less generous than their non-religious peers. At the same time, religious parents were more likely than non-religious ones to consider their children empathetic and sensitive to the plight of others.

It’s a common assumption in the United States that faith goes hand-in-hand with goodness. The Pew Research Center reported last year that 53 percent of Americans think it’s necessary to believe in God to be moral.  Americans overwhelmingly elect Christian representatives, and they distrust atheists. This study challenges those attitudes. It was the children in non-religious homes most likely to be generous toward a stranger. The longer a child had lived in a religious home, the stingier he was compared to his secular peers.

Here’s how the study worked: researchers asked kids to play a game which required them to decide how many stickers to share with an anonymous peer from the same school and similar ethnic group. In their report, the researchers noted it was important for the anonymous stranger to be similar to the child so that other biases didn’t get in the way. Researchers also measured how children perceived interpersonal harm and what degree of punishment they thought was appropriate. Religious children judged others’ actions as meaner and more deserving of punishment than kids in secular homes.

The study concluded that in this way religious children tend to come across as more judgmental, while also being less altruistic. Nearly 1,200 children from the U.S., Canada, Jordan, Turkey, South Africa and China participated. Most of the kids came from Christian, Muslim or non-religious households, with a small number from Jewish, Buddhist, Hindu and agnostic homes. Their ages ranged from 5 to 12.