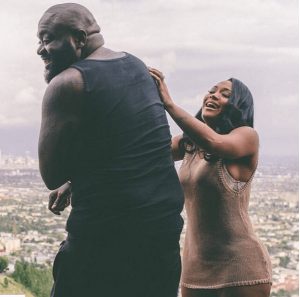 Just days after news of their break-up hit, new reports say that Rick Ross is back with his model fiance, Lira Galore.

According to The Shade Room, the rapper is now back with Lira aftr dumpingher 2 weeks ago.

Rozay proposed to Lira in October but things got really messy between the couple few weeks after the Mayback Music Group boss proposed.

The rapper didn’t just kick Lira out of his Miami mansion but he also took back his $350,000 diamond engagement ring from her finger.

But on November 12, Rick took to Snapchat  to share loving photos of himself and Galore. “My Queen,” the rapper captioned… Indirectly saying, they are back together and their wedding is still on course.

In the snapchat he posted, Galore is seen wearing the same ring he earlier seized.