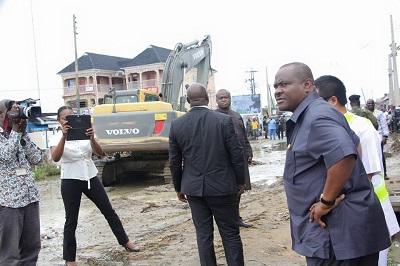 Governor Nyesom Wike of Rivers State said on Wednesday that the state government had completed 70 kilometres of roads in its urban renewable programme.

He said the completed roads were in Port Harcourt, Obio/Akpor, Eleme and Oyigbo local governments.

Wike said that the road reconstruction programme of his administration was aimed at improving the state’s economy.

The governor said he was satisfied with the pace of road construction, stressing that the state government would complete key roads in all the adjoining local government areas to the state capital.

“We are interested in infrastructural development because these roads drive the economy.

“We have engaged in the total revolution of the road infrastructure for the overall growth of the state.

“You can see the joy on the faces of the people during today’s inspection visits to industry road and Borokiri.

“You can see that the people are happy with the government for the revolution in the road infrastructure sector”, he said.

Wike also said that the government had embarked on key projects in housing, education, environmental and agricultural sectors in the last two months. (NAN)