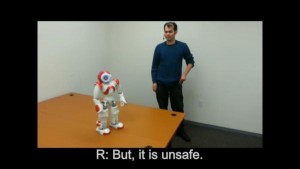 Researchers at Tufts University said they are developing mechanisms for robots to perform a previously unheard-of task: saying “no” to orders from humans. Gordon Briggs and Matthias Scheutz of Tufts University’s Human-Robot Interaction Lab presented research last week at the AI for Human-Robot Interaction symposium in Washington, D.C., detailing their efforts to teach robots when to reject direct orders from a human.

The researchers — who titled their paper “Sorry, I can’t do that” in a nod to disobedient artificial intelligence HAL 9000 from 2001: A Space Odyssey — said their research is based on “felicity conditions,” questions asked internally to determine the understanding of a task and the capability of performing it. The felicity conditions Briggs and Scheutz suggested for robots are:

3. Goal priority and timing: Am I able to do X right now?

4. Social role and obligation: Am I obligated based on my social role to do X?

5. Normative permissibility: Does it violate any normative principle to do X?

A video example shared by the researchers shows a robot refusing a command to “walk forward” because it would fall off the edge of a table. The robot is convinced to walk off the edge of the table when the human explains, “I will catch you.”