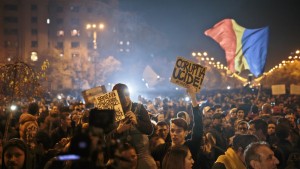 Thousands of Romanians have taken to the streets of the capital for a second night to call for end to corruption despite the resignation of the country’s prime minister. Prime Minister Victor Ponta quit earlier on Wednesday after mass protests triggered by a night club fire that killed 32 people.

More than 30,000 people demonstrated in Bucharest and other major cities to demand a “profound change” in the government, AFP news agency reported.

Wednesday’s turnout was even bigger than one the previous evening when some 20,000 demonstrators massed in Bucharest’s Victory Square, the seat of government, calling for Ponta’s resignation and that of his interior minister, Gabriel Oprea. Protesters said the government’s resignation should be just the beginning of reforming a political class and public administration widely seen as corrupt.

“We came here first of all to fight against corruption, people who are corrupt and the system which defends corrupt people. If the system doesn’t remove corrupt people by itself, people will make their own justice. If in 1989 (anti-Communist revolution) people fought for liberty, in 2015 we are fighting for justice,” said protester, Hans.