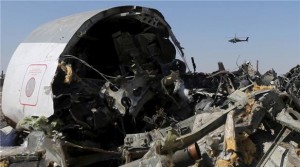 British and US officials say they have information suggesting the Russian jetliner that crashed in Egypt may have been brought down by a bomb. British Foreign Secretary Philip Hammond said on Wednesday that there was a “significant possibility” the crash was caused by a bomb, and Britain was suspending flights to and from the Red Sea resort of Sharm el-Sheikh indefinitely.

After a meeting of the British government’s crisis committee, COBRA, Hammond said Britain was advising its citizens not to go on vacation to Sharm el-Sheikh, which is visited by hundreds of thousands of Britons a year.

Intercepted communications played a role in the tentative conclusion that the Islamic State of Iraq and the Levant (ISIL) group’s Sinai affiliate planted an explosive device on the plane, a US official briefed on the matter told Associated Press. He spoke on condition of anonymity because he wasn’t authorised to discuss intelligence matters publicly.

The US and British security sources, however, stressed they had reached no final conclusions about the crash, as forensic evidence from the blast site, including the airplane’s black box, was still being analysed. Meanwhile, Russian and Egyptian investigators said that the cockpit voice recorder of the Metrojet Airbus A321-200 had suffered substantial damage in the weekend crash that killed 224 people.