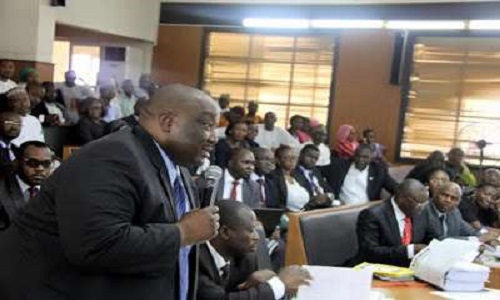 Lawyers and practitioners in the media, who have been commenting on the stay of proceedings issued by the Supreme Court to the Code of Conduct Tribunal on the trial of Senate President Bukola Saraki, using “uncouth language” to beware of being held in contempt of the apex court.

A former President of the Nigerian Bar Association (NBA) and one of the lawyers representing Saraki at the Tribunal, Mr Joseph Daudu, SAN, who gave the warning in a statement on Thursday, was reacting to reports in the media credited to some prominent lawyers describing the Supreme Court’s decision as “illegal”.

Daudu expressed surprise at the position taken by these lawyers, which he said was almost sacrilegious to take in the nation’s justice system.

“That is most unfortunate as decency and elementary regard for the finality of the decisions of the Supreme Court should restrain every citizen of this country, particularly a legal practitioner, from using such base and scurrilous language against the highest court of the land.

“It is a known legal axiom that a decision of the Supreme Court of Nigeria cannot be illegal in any form or manner, as it is binding on all persons and authorities in this country.

“If a person is aggrieved by the decision of the court, the only approach is to wait for an opportunity to arise and such a person can ask the court to overrule itself or depart its earlier decision”, he stated.

The ex-NBA president warned that “no amount of political inclination or rascality should prompt or compel a lawyer or even a layman to employ such uncouth language against the Supreme Court of Nigeria”.

“It is obvious that this orchestrated backlash against a correct decision of the court is aimed at intimidating it and may the day never come when such a hallowed court will succumb to mob action or intimidation”.

He further warned that he might be compelled to bring contempt proceedings against all the commentators who, by their actions, were seeking to prejudice the final outcome of the appeal on the Saraki’s case in the Supreme Court “through intimidation and skewed reportage of facts”.