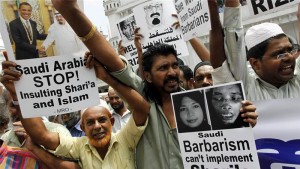 Saudi Arabia has executed at least 151 people so far this year – the most put to death in a single year since 1995. The stark rise in the number of executions has seen on average of one person killed every two days, according to the human rights group Amnesty International. “The Saudi Arabian authorities appear intent on continuing a bloody execution spree,” Amnesty’s report released on Monday said, quoting James Lynch, deputy director at the Middle East and North Africa programme. It is the most people put to death in the kingdom in one year since 1995, when 192 executions were reportedly carried out.

Most recent years have had between 79 and 90 people killed by beheadings annually for crimes including “non-lethal offences such as drug-related ones,” according to the London-based rights group.  The large number of executions shed further light on what Amnesty referred to as unfair judicial proceedings, with a disproportionate imposition of capital punishment on foreign nationals.

“Of the 63 people executed this year for drug-related charges, the vast majority, 45 people, were foreign nationals,” the report said. Khalid al-Dakhil, a Saudi political commentator based in Riyadh, challenged “the integrity” of Amnesty’s report, saying it failed to mention Iran’s execution record.

“Iran executes far more people a year than Saudi Arabia, but it does not get the negative publicity Saudi Arabia has. This is something that must be addressed,” Dakhil told Al Jazeera. Saudi Arabia, Iran, China, the United States, and Iraq are the top five countries with the most executions. In total, 71 people executed so far in 2015 have been foreigners. The majority were migrant workers from poorer countries who are often sentenced to die without any knowledge of the court’s proceedings, because they don’t speak Arabic and do not receive translations. Previous cases in which Saudi authorities applied the death penalty also include confessions allegedly extracted through torture, and even accusations of sorcery.