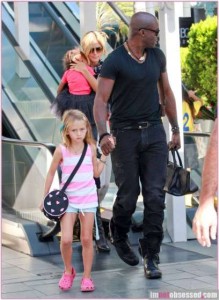 New reports say that Seal opened up on how his ex wife, Hollywood actress, Heidi Klum was the brain behind their annual wedding vows renewal.

In 2012, the couple who had been so in love, shocked their fans when they got divorced after renewing their wedding vows for the 7th year.

Seal and Klum seemed devoted to one another, renewing their vows each year in a celebration of their love, but, Seal now admits, he had some reservations about the annual event, saying it also wasn’t his idea.

He revealed to Andy Cohen, saying:

“That was my ex-wife’s idea, to be honest.

“It kind of turned into a little bit of a circus, which I wasn’t terribly fond of because, by default, I’m quite a private person.

”That’s the thing I disliked most about it.”

However he explained that there were things he liked about the renewals:

“I don’t know how necessary [renewing the vows] was, but it was cool.

”You’re married and you become a team player.

“You understand that each of you have different lives and you do whatever you can to support your partner’s life.”

During their marriage, Klum had spoken of their tradition: “It’s our time – a lovely family time.”