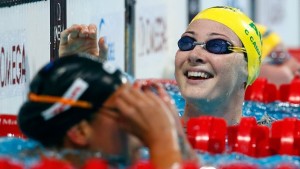 Australian swimmer Cate Campbell set a world record for the 100 metres freestyle on Saturday – but still finished last in the race. A specialist sprinter, Campbell broke the 100m record during the final of the 200m freestyle at her national short course championship.

She set off at full speed and reached the halfway point of the eight-lap race of the 25m pool in 50.91 seconds.

With the record safely in the bag, the 23-year-old then slowed down and coasted to the finish. She took almost another 90 seconds to complete the last four laps and allowed all her rivals to overtake her.

“It was pretty unique to get a world record and then finish dead last in your race,” Campbell said after the bizarre race at Sydney’s Olympic pool.