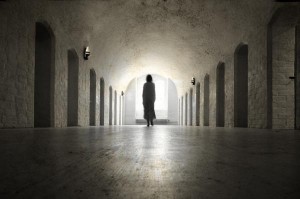 On Halloween, neighborhoods all over the United States transform into ghoulish wonderlands of candy and costumes, but according to a Pew Research Center survey, many in those neighborhoods report spooky experiences with those from beyond the grave. UPI reports:

The survey, published in late 2009, reveals 18 percent of Americans say they have come nearly face-to-face with a ghost. The number of those who believe they have been in the presence of an apparition doubled since a similar poll 13 years prior. In 1996, only 9 percent of Americans said they had seen a ghost. Of just over 2,000 sample survey participants, 29 percent said they have at least been in touch with the dead through feeling or other sensation. The total report comes from two surveys consisting of about 4,000 American adults.

Dr. Alice Gregory from Goldsmiths University suggests such sightings or experiences have a more solid explanation. Factors such as sleep — especially a condition called sleep paralysis — can make a person believe they are in the presence of a ghostly figure. “Hallucinations may occur during this experience,” she said according to a reportpublished on BT.com. “And those suffering from [sleep paralysis] may be unsure whether the hallucination was a dream or not. Features of REM sleep — this time the dream aspect — appears to be carrying over into wakefulness.”

Another factor able to influence a person’s susceptibility to experiencing the supposed paranormal can be underlying religious belief. Professor Claude Fischer of the University of California, Berkley said in a 2013 blog pst “most American adults in the 21st Century say that they believe in life after death and in the devil.” People who attend religious services at least weekly are less likely to say they have seen a ghost (11 percent). Among those who attend less frequently, 23 percent say they have seen a ghost.