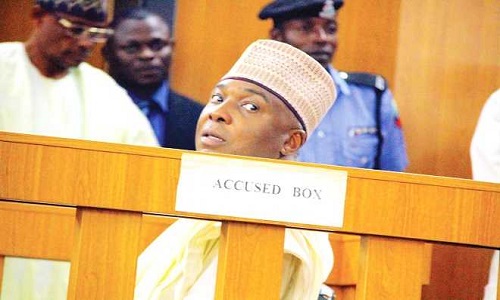 The Supreme Court has ordered the Code of Conduct tribunal to halt its trial of the Senate President, Dr. Bukola Saraki.

Saraki was arraigned by the Federal Government before the CCT on a 13-count charge bordering on false assets declaration while he was Kwara State Governor between 2003 and 2011.

Recall that at the last hearing of the tribunal, lawyers to the embattled Senate president reportedly walked out on the tribunal following its refusal to accede to their application for stay of proceedings in Saraki’s trial.

The lawyers led by Mahmud Magaji (SAN), have since denied reports that they walked out on the tribunal.

Delivering a ruling in the matter brought before it by Mr. Saraki, the apex court held that the prosecution ought to have suspended its trial of the Senate president and await the outcome of his appeal before the Supreme Court.

Counsel to the FG, Rotimi Jacobs, SAN, had earlier given an undertaking that the prosecution would not go ahead with Saraki’s trial.