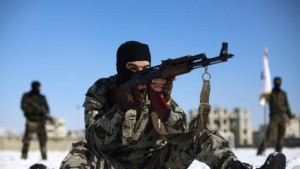 Syrian rebel groups have locked people in cages and driven them to areas near Damascus to use as human shields against heavy government air raids. Aljazeera has more:

A video posted online by the Shaam News Network, an opposition media outlet, showed prisoners in iron cages being driven on the back of pick-up trucks through what it said was the area of Eastern Ghouta, northeast of the capital.  The prisoners are believed to be officers and their families from the Alawite sect.

“After what happened in the city of Douma and the whole of eastern Ghouta, most people decided to place those prisoners from the Alawite sect and high-ranking regime officers in cages so they can taste our misery,” said Bara Abdul Rahman, a media activist in the video.

Douma is regularly targeted by government air strikes. A medical centre run by Doctors Without Borders (MSF) was bombed on Friday killing 70 and leaving at least 550 wounded. Meanwhile, UN special envoy to Syria, Staffan de Mistura, has said that he believed the Syrian government and representatives of the opposition should be involved in the working groups in the follow up of the Vienna talks.