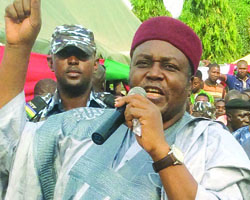 Governor Darius Ishaku of Taraba State has vowed to appeal the verdict of the Election Petitions Tribunal which sacked him and declared Sen. Aisha Alhassan of the All Progressives Congress (APC) as winner of the April 11, 2015 gubernatorial poll.

Ishaku disclosed this at a press conference on Saturday in Jalingo, the state capital while reacting to the tribunal’s judgment and called on the citizens of the state to remain calm and be law abiding.

The governor said he believed that the court of appeal would reverse the judgment and give him back his victory.

However, in a twisted development, the Public Relations Officer of the Peoples Democratic Party (PDP) in the state, Mr. Napoleon Adamu, told people in the state to accept the verdict and cooperate with the winner in the interest of the state.

Mr. Adamu told reporters that flexing muscles after the judgment would not be in the interest of the state.

Also commenting on the ruling, the state chairman of the APC, Alhaji Hassan Ardo, said it was a victory for democracy, adding that judgment from tribunals in other parts of the country showed clearly that the judiciary was up to the task of protecting democratic tenets in the country.

The supporters defied heavy security presence and stormed the streets chanting, “Sai Mama, “Maman Taraba oyoyo” to show their happiness over the judgment.