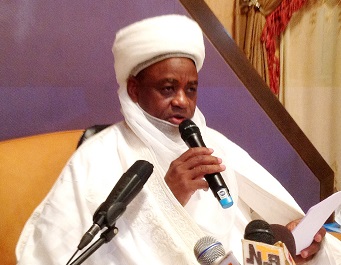 The Sultan of Sokoto and President General of the Nigerian Supreme Council for Islamic Affairs, Alhaji Muhammad Sa’ad Abubakar has called on Muslims wherever they are to expose bad elements among them, saying terrorism has no place in Islam.

The Sultan also urged Muslims to educate their children to prevent the young ones from being recruited into terrorism and insurgency.

Sultan Abubakar spoke in Ado Ekiti, the Ekiti State capital on Saturday at the investiture of the Grand Imam of Ekiti, Sheikh Jamiu Kewulere Bello, as President General of the League of Imams and Alfas in South-West, Edo and Delta states.

Expressing delight with the existing cordial relationship between Muslims and Christians in the state, the Sultan, who is the spiritual leader of the Muslim community in Nigeria, said the presence of adherents of the two faiths at the investiture of Sheikh Bello was a big lesson for everybody to take home.

According to him, occasions like this does not call for merrymaking but to address some issues facing Muslims in Nigeria and other parts of the world, especially terrorism, which he maintained was not an Islamic agenda.

Abubakar condemned terrorism in strong terms, saying tackling the menace was a task that must be accomplished, while urging Muslims not to hesitate to fish out those he described as “bad elements” that engage in acts not supported by the religion.

“We know what Islam is presently facing, most especially the issue of terrorism. We know this is not an Islamic agenda and the biggest challenge facing the (new) President General is to bring all Imams, Alfas and Ulamas to brainstorm on how we can stop our children from participating in anti-Islamic activities.

“As teachers in Islamic studies, we want you to teach our children what Islam is and what Islam is not. Imagine a 10-year-old involved in suicide bombing and killing, this has no place in Islam and has no basis in our religion.

“Fish out bad elements among Muslims and have them dealt with as criminals, we have to educate our children what Islam is and what Islam is not.

“If we know any bad person among us, let us fish them out. It is a big task no doubt, we must be united as Ummah because what binds us together is Islam.

“We must work together to bring our clerics together to tackle terrorism and extremism because this is unIslamic not only in Nigeria but in other parts of the world.

“The way we can do it is through education and not through alms taking. We are one people and we will continue to be one people.

“Those doing contrary to the Qur’an and the Bible must be dealt with, let us tell them that what they are doing is unIslamic. We are proud to be Muslims and we have no regrets that God created us Muslims.

“We must follow the teachings of Islam, the tenets of Islam. There is no compulsion in religion. Insha Allah, Nigeria will be a better place to live in.

“Let us unite. Let us come together. Let us fish out the evil ones among us. Go back home and reflect on what we have heard here today”, the Sultan stressed.

The Sultan was particularly delighted at the presence at the event of the Ewi of Ado Ekiti, Oba Rufus Adeyemo Adejugbe, who is a Christian and the Catholic Bishop of Ekiti Diocese, the Most Revd. Felix Ajakaye.

Speaking shortly after his installation, Sheikh Kewulere paid tributes to all his predecessors and expressed gratitude to his colleagues in the League in all the eight states under his domain.

He promised to justify the confidence reposed in him and build on the foundation already laid to promote Islam and inter-religious harmony.