Three men simply identified as Joseph, Jamilu and Gambo, suspected to be members of a robbery gang that specialized in attacking motorists and commuters trapped in traffic around Ikoyi area of Lagos state have been arrested by operatives of the State Police Command Rapid Response Squad, RRS. 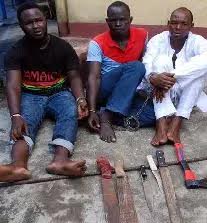 DAILY POST reports that the RRS Commander, Mr. Olatunji Disu, an Assistant Commissioner of Police, who confirmed the arrest, said they were arrested on Saturday in their hideout around Bourdillon, while preparing for an operation, with four cutlasses, axes and iron rods used in breaking victims’ cars’ windscreens in their possession.

According to the Commander, the suspects were arrested following complaints from members of the public on incessant traffic robbery attacks around the axis.

Disu said, “Our men laid an ambush, which led to the arrest of 24-year-old Joseph, 29-year-old Jamilu and 30-year-old Gambo.

“Others managed to escape the dragnet of the Police. When the policemen combed the area, different weapons were recovered from them.

“Jamilu, who hails from Jigawa State, said he was innocent of the allegation, saying one of his friends, Joseph, was a member of the robbery gang,” Disu noted.

According to Jamilu, “Gambo and I are innocent. We were relaxing under a tree in the field when we were arrested.

We were selling second-hand goods under the bridge before government sent us away.

“Since then, we have been staying under the tree. We are not members of the gang that attack people in traffic. But Joseph is. They are 15 in number. He usually leaves every evening with members of his gang.

“The field is their meeting place. When they come back from any operation, they would bring travelling bags, school bags, telephones and other items stolen from their victims.

“Gambo and I never partook in the operation or sharing of loot,” Jamilu added.