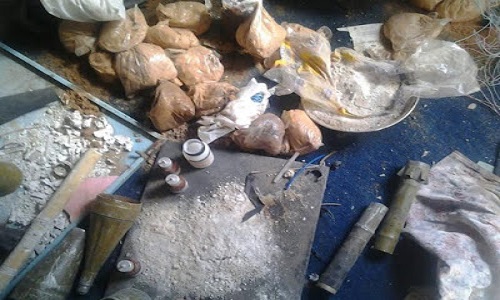 The Media Coordinator, Operation Lafiya Dole, Col. Tukur Gusau, said this in a statement in Maiduguri, the Borno State capital on Monday.

“Preliminary investigations revealed that the suspect said that nine of them sneaked into Maiduguri armed with AK 47 assault rifle each and a Toyota Hilux vehicle laden with 20 Improvised Explosive Devices (IEDs) meant to be detonated at some selected targets in the city”, he said.

“The Theater Commander Operation Lafiya Dole, Maj.-Gen. Yusha’u Abubakar, commended the efforts of the troops and renewed call for the troops and the public to be more vigilant and security conscious”, he said.

He further stated that troops of the 21 Brigade of the army had also discovered an IED making factory along Bama-Gonin Kurmi within the outskirts of Bama town in Borno.

“In a related development, troops of 21 Brigade Nigerian Army, while on offensive operations on Boko Haram terrorists location, with the support from the Nigerian Air Force, discovered and destroyed the terrorists IEDs and Rocket making factory along Bama-Gonin Kurmi within the outskirts of Bama town, Borno.

“Others are; unprimed IEDs and various technical and laboratory equipment suspected to be stolen from school laboratories around Bama before they were dislodged from the area”, Col. Gusau stated.