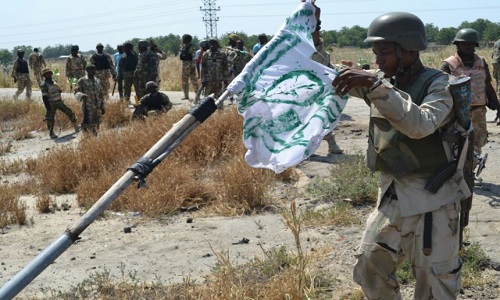 A daring attempt by Boko Haram terrorists to attack military positions in Gwoza, Borno State on Friday morning, was successfully repelled by troops, the Nigeria army has said.

A statement by army spokesman, Colonel Sani Usman said: “Boko Haram terrorists despite their obvious losses have made a desperate but costly attempt to attack Nigerian Army’s blocking position early this morning in Gwoza.

“The encounter which started at about 5.00am today lasted for almost two hours. Although details are still being collated, suffice to state that 7 terrorists were gunned down”.

He stated that troops are on hot pursuit of the attackers into Sambisa forest with a view to eliminating all of them while the Nigerian Air Force is also bombarding their locations.

Col. Usman recalled that the Boko Haram terrorists’ ability as a coherent fighting force has been degraded over time by troops through relentless attacks, patrols and aerial bambardments.

“The desperate attack today was a failed attempt to project an image of strength. It is part of the last struggles of a dying evil”, the statement added.