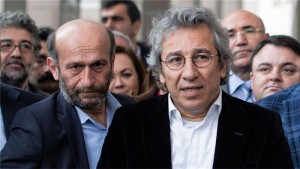 Two prominent Turkish journalists were arrested on charges of “spying” and “revealing state secrets” after they published a story alleging that members of the state intelligence agency were sending weapons into Syria.

The Cumhuriyet newspaper’s Editor-in-Chief Can Dundar and Ankara Bureau Chief Erdem Gul were placed in pre-trial detention after the court decision to charge them on Thursday night, Turkish media reported.

“Don’t worry, this ruling is nothing but a badge of honour to us,” Dundar told reporters and civil society representatives at the court before being taken into custody.

It is unclear how much jail time the journalists face as a prosecutor must still indict them.

According to the Cumhuriyet, Turkish security forces in January 2014 intercepted a convoy of trucks near the Syrian border and discovered boxes of what the daily described as weapons and ammunition destined for rebels fighting against Syrian President Bashar al-Assad.