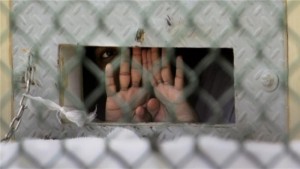 The US defence department has announced the release of five Yemeni men held at the Guantanamo Bay prison camp in Cuba.  The group, who had spent more than a decade in Guantanamo, were transferred to the UAE, the Pentagon said in a statement published on its website on Monday.

The men were identified as Ali al-Razihi, Khalid al-Qadasi, Adil al-Busays, Sulayman al-Nahdi and Fahmi al-Asani. US President Barack Obama signed an executive order to close the camp shortly after taking power in 2009, establishing the Guantanamo Review Task Force to review and clear prisoners for release. The review board, which is made up of six US departments and agencies, unanimously approved the release of all the men except Razihi, but the men continued to be detained.

None of the men have ever been charged with a crime.  A separate review board found that Razihi was no longer a threat to the US and should also be released. “The Periodic Review Board … determined continued law of war detention of al-Razihi does not remain necessary to protect against a continuing significant threat to the security of the United States,” the statement said.

The Pentagon said the transfers took place “consistent with appropriate security and humane treatment measures” and that it was grateful to the Emirati government for its cooperation in helping close the prison.