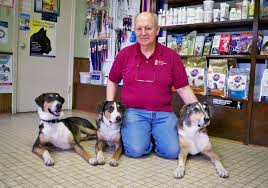 I’ve heard of people buying extra pairs of their favorite jeans, but a Louisiana veterinarian has actually gone and gotten himself two extra copies of his favorite dog! Phillip Dupont spent over $100,000 cloning his beloved pet dog Melvin because he simply couldn’t bear to part with him. Oddity Central reports:

Phillip had Melvin cloned about two years ago, and he now has two identical dogs – Ken Gordon, named after his uncle, and Henry Fontenot, named after his friend – with the same traits and characteristics as Melvin. The pups were around for the last year of Melvin’s life, who was nearly 12 when Dupont had to put him down last year, due to his failing health. Ken and Henry have now replaced Melvin as fixtures at Dupont’s clinic in Lafayette. “They’re maturing into the dog that Melvin was,” said Paula, Phillip’s wife. “I used to tell people that Melvin was the office greeter – my office manager. Ken’s kind of taken his place. Henry has stepped up and is also greeting people. Now they have two dogs meeting people – standing up and putting their paws on my desk.”

The two dogs are so similar that it’s difficult even for the Duponts to tell them apart. But they aren’t identical. Ken is a day older but slightly smaller, and they’re like mirror images with white fur on their legs – one on the left and the other on the right. They both have a black claw on their left front paw. Ken wears a red collar and Henry has a black one for easy identification.

The Duponts had lots of reasons for cloning Melvin – not only did they love him dearly, but considered him the smartest dog they’d ever known. Like this one time when they had lost their keys and Melvin kept looking down at his paw. Finally, they realised that Melvin had been trying to show them where the keys were. And he was also quite friendly and lovable – they’d never had a problem finding a dogsitter for him. “He was different,” Phillip said of Melvin, who was part Catahoula and part Doberman. “Of all the dogs I had, he was completely different. He listened. You could talk to him and you swore he understood what you were talking about. It was weird.”