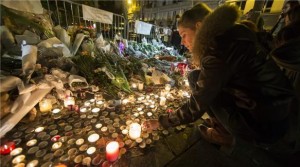 France has entered its second day of mourning following coordinated attacks claimed by ISIL killed at least 129 people.  Mourners lit candles and laid flowers on Sunday at the locations of the attacks across Paris, standing in silence as police investigators elsewhere in the country launched a search for the attackers’ accomplices.

Stepping up their hunt for information, authorities found several AK47 assault rifles in the back of an abandoned Seat car in an eastern suburb of Paris. Witnesses said the car, found in Montreuil, was used by attackers at multiple locations on Friday night, the AFP news agency said.  Earlier French police identified Omar Ismail Mostefai, a 29-year-old Paris native, as one of the attacker.

Mostefai’s detached finger was found overnight at the Bataclan concert hall, the scene of the bloodiest attack.  The French citizen had been known to police for his alleged links to armed groups but had not been previously linked to violent activities. Police are also holding six of the man’s relatives. French authorities believe the attacks were planned abroad by the Islamic State of Iraq and the Levant (ISIL) group, but have not yet confirmed the identities of others involved.

ISIL purportedly claimed responsibility for the attacks shortly after the incident but has also not revealed the identities of the attackers. Investigators in France, Belgium, Greece and Germany are trying to identify the seven attackers and their accomplices. In Belgium, police arrested several people over their alleged links to the attacks. Koen Geens, Belgian justice minister, said those arrested were detained in connection with a grey Volkswagen Polo that was rented in Belgium but found near the scene of the attack.