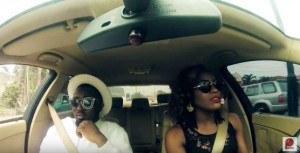 If you haven’t seen the latest episode of Drive Time With Vixen, Yvonne ‘Vixen’ Ekwere, it features Ice Prince behind the wheels of his luxury car.

Yvonne talks to Ice Prince about a range of things in his neighbourhood of Ojodu.

In the interesting interview, Ice Prince talks about his girlfriend Maima Nkewa, and how he loves her.
The rapper said time will tell if he is the one for her, and vice-versa.
The ‘Boss’ rapper spoke about his new position as the Vice-President of Chocolate City and said he is a businessman who is always in search of new opportunities which is what led him to meet Hip Hop mogul Jay Z back in April.

He hinted that as a result of him meeting Jay Z, D’usse, the mogul’s new alcoholic drink venture is now in Nigeria.