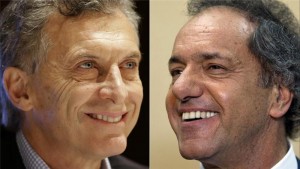 Argentinians have begun voting in the country’s presidential runoff election, which could mark the end of outgoing President Cristina Kirchner’s domination of the country. Kirchner’s preferred candidate, Daniel Scioli, is trying to hold off a challenge in Sunday’s ballot from right-winger Mauricio Macri, with polls published last week running the candidates neck and neck.

If Macri succeeds, he will end 12 years of centre-left rule in the country, dominated by Kirchner and her late-husband Nestor Kirchner. Neither candidate achieved the 45 percent of votes needed to avoid a runoff in the first round of the election held in October.  Scioli picked up 35 percent of the vote, with Macri a percentage point behind on 34 percent.

In a debate held last Sunday neither candidate managed to take a definitive advantage, though observers said Macri was the more relaxed of the candidates.  Macri is promising a break from Kirchner’s leftist economic policy, promising a more business friendly environment in the country, while Scioli is prioritising policies aimed at helping Argentina’s poorest. Kirchner has ruled the country since taking over from Nestor in 2007, and has reached the end of her two-term limit.

Despite early fiscal success, Argentina’s economy has started to flounder, and whoever wins Sunday’s vote will expect to inherit a litany of financial problems. The country is facing inflation and is involved in a legal battle against two American hedge funds that reject its plans to restructure the $100bn in debt it defaulted on in 2001.