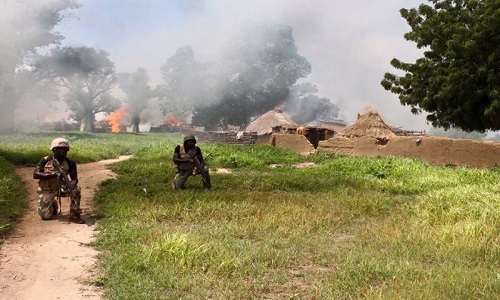 The Theater Commander of the Operation Lafiya Dole, Maj.-Gen. Yusha’u Abubakar, yesterday said Sambisa must be captured before the end of December deadline having liberated villages around the once dreaded forest.

The Theatre Commander, who gave the charge when he carried out an inspection of the liberated Bita village in Gwoza local government area of Borno State, said though his troops are yet to reach the promised land, he is happy that they are well progressing.

Bita village is situated 15 kilometres away from the Sambisa forest.

The commander, while inspecting some destroyed Boko Haram camps in the surrounding liberated village, said he was at Bita village in order to be close to his men and officers at the front lines.

“The Chief of Army Staff, Lt.-Gen. TY Buratai gave directives that you must be close to your troops. You must be able to see what they are doing; guide them, look at their challenges, encourage and give them the moral to fight the war”, he said.

“For us to be here in Bita, it implies that we have done a lot of job by capturing, clearing and taking care of all those camps that were under Boko Haram. And, we are using this as a staging area for further offensive operations and objectives”, Gen. Abubakar added.