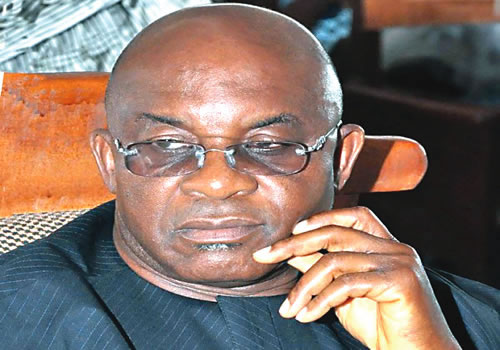 Immediate past Senate President, David Mark, Sunday denied laying the blame for the Appeal Court judgment that nullified his election as the senator representing Benue South District at the doorstep of the Benue State Government.

He, however, noted that he found it curious that the state governor, Samuel Ortom, promptly came up with a frantic denial of playing any role in the judicial decision as if he sat on the panel of judges who voided the election and ordered a re-run within 90 days.

Senator Mark spoke through his media assistant Paul Mumeh in a statement made available to reporters in Abuja.

The statement was a follow up to an earlier one where the former Senate president expressed his confidence of retaining his seat even the polls were to be conducted 100 times.

The Court of Appeal sitting in Makurdi, the Benue State capital on Saturday while delivering judgment in an appeal brought before it by Daniel Onjeh of the All Progressives Congress, APC, set aside the ruling of the Legislative Elections Petition Tribunal, which upheld Mark’s election and ordered the Independent National Electoral Commission, INEC, to conduct fresh elections in 90 days.

In the statement yesterday, Mark said he found it more strange that Ortom, claimed “neither to have interfered nor influenced the judgment” when nobody accused or mentioned the governor’s name in any blame sharing.

The statement read in part, “We do not intend to join issues with anyone over the decision of the Court of Appeal in Makurdi, Benue State that voided the election of the former President of the Senate, Senator David Mark, as Senator representing Benue South

“But we found it curious that the state governor, Chief Samuel Ortom, can come up with a frantic denial of playing any role in the judicial decision as if he sat on the panel.

“It is even more strange that Ortom, through his media adviser, Terve Akase, said his boss neither interfered nor influenced the judgment whereas nobody had accused or mentioned the governor’s name in any blame sharing.

“It is trite saying in African tradition that if an owl cried in the night and a child dies the morning, we do not need to ask who killed the child.

“Would it be wrong to conclude therefore that Ortom, through his media adviser, has personally or vicariously, taken responsibility for the panel decision to rule against Senator Mark?

“On our part, we believe in the independence of the judiciary as the last hope of the common man but the governor’s quick denial of any role in the judgment, even when he had not been accused, is a subtle narrative of the role the state government played in this bizarre decision of the Appeal panel.

“In Benue South, hate him or love him, Senator Mark adorns a garment washed by God which no man can stain.

“If for whatever reason, the justices of Appeal Tribunal found merit in awarding victory to a man who neither participated nor contested the election in the real sense of the word, we hail their ingenuity.

“For us, it is more revealing that the Appeal panel did not question or disapprove the results of the election but found comfort in conflict in dates signed by the INEC returning officer for no fault of Sen. Mark as if that was more relevant than the votes that count and were counted.

“Nothing can be farther from the truth. Our people voted overwhelmingly for Sen. Mark on March 28th 2015 and are prepared to do same even now. No amount of external forces or harassment can undermine the resolve of our people.

“It is no longer a surprise that people forget their yesterday with ease but we wish Ortom well”.