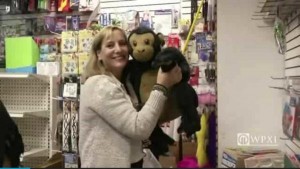 A New York businesswoman who wanted to bring a “grander scale” to her yearly charitable giving bought an entire toy store to donate to homeless kids. Carol Suchman, a New York businesswoman and philanthropist, said she donates toys to the city’s poor children for the holiday season each year, and she had an idea recently when she passed by the shuttered Hudson Party Store in Manhattan’s West Village. UPI has more:

Suchman said the store appeared permanently closed and had a “For Rent” sign in the window. “When I saw this toy store, I just realized I could do it on a grander scale,” Suchmantold NY1 of her holiday gift-giving. “The toys in there looked so sad, and they were gathering dust,” she told CBS MoneyWatch. “It occurred to me we should bring those toys to where they should be going — to all the homeless kids in the city.”

Suchman said she was able to get into contact with the owner of Hudson Party Store. “We talked and negotiated and bought the entire toy store,” she said. Suchman said she packed up the store’s inventory, including both toys and school supplies, and took it to the New York City Department of Homeless Services.

“I’ve been doing this for many years and we have many generous sponsors — people do toy drives and do a lot of giving — but I have to say, that this is the first time anybody ever bought out an entire store and donated to the children of shelters,” said Antonio Rodriquez, director of special events at DHS. Suchman, who used to own a successful technology firm with her husband, said she makes it an annual tradition to donate gifts to children in need.