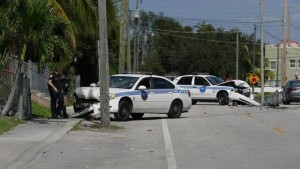 A woman is in the hospital after she hopped into a police car and crashed it into another police cruiser, injuring a police officer.

A City of Miami Police officer was trying to get the woman off the roof of a house when she jumped off and got into his car. She smashed the car head-on into another police cruiser, which was called to assist in the incident. A man who chose to remain anonymous saw the entire ordeal as it occurred. “I was in the sidewalk when I see the lady actually jumps into the police vehicle, and the cop actually tried to drag her out,” he said. “By the time she tried, she kinda just booked it. Stepped on it, and the other cop was turning in trying to block her, and she just head-on collision right into him, and she got out of the car and just ran right down.”

Audio has been released from when the police officer arrived on the scene and noticed the woman on the roof. “She just fell off the roof, but I can’t get in there,” he said, “so I don’t know if she’s hurt or not.” The woman was later found bleeding at a nearby store. 7Skyforce HD flew over the scene at Northwest 28th Avenue and Eighth Street, where the two police cruisers could be seen with serious front-end damage. “The officer that was coming to assist the officer to try and find the woman did not know that she had taken the vehicle, so he was slowing down, but she was accelerating,” said Miami Police spokesperson Frederica Burden.

One officer was transported to Jackson Memorial Hospital, while the other was treated on the scene. Both officers are believed to be OK. Police believe the incident could have been much worse. “She could have gotten off of the street, into the busy intersection, and it could have been multiple injuries, so we’re fortunate,” said Burden. “It is amazing. Both vehicles are probably totaled, but yes, the officer is OK. He was treated and possibly has gone home by now.”