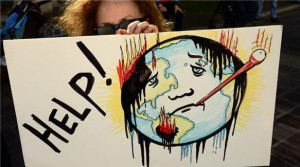 World leaders are gathering in Paris for the UN climate conference known as COP21, aimed at forging a deal to limit global warming to 2C. Heads of 147 state and government are in the French capital for the start of two weeks of intense negotiations. Monday’s agenda includes speeches by the leaders and environment ministers of a number of countries, including Germany, Iceland, Peru and Scotland.

A total of 25,000 official delegates hope to secure a legally binding accord for every country to cut carbon emissions. The accord needs to come into effect from the year 2020, with current commitments from the Kyoto Protocol run out.  US President Barack Obama expressing his optimisim in a Facebook post that a deal could be reached.

“What we’re trying to do in Paris is put in place a long-term framework for further emissions reductions … targets set by each nation, but transparent enough to be verified by other nations,” he said. The talks hope to resolve the concerns of large developing countries, such as India, that say they are dependent on fossil fuels to spur economic growth, and richer countries, which are moving towards adopting cleaner energy sources but continue to be a big source of emissions.

Smaller and poorer countries that are more vulnerable to the effects of climate change are pressing for a deal that prioritises their safety. Al Jazeera’s Nick Clark, reporting from Paris, said China had previously been seen as an obstacle in reaching a deal, but its leaders had recently stressed the importance of finding renewable alternatives to fossil fuels.