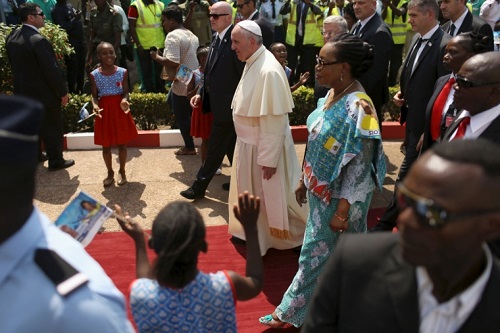 Pope Francis arrived Sunday in the conflict-torn Central African Republic, brushing aside security concerns to bring a message of peace and reconciliation to a country where violence between Christian and Muslim militants has forced nearly 1 million from their homes over the last two years and divided the capital city.

at the heavily secured Bangui airport. The pope’s Alitalia charter landed just beyond the settlement for displaced residents that has cropped up on the airport’s edge, housing some of the people displaced by the violence.

As Francis emerged, a huge cheer broke out from the small crowd and the cheers continued along his motorcade route into town, where he was welcomed by Interim President Catherine Samba-Panza and the diplomatic corps.

The precarious security situation in Bangui, the capital, raised the possibility in recent weeks that the pope could cancel his visit. Less than a year ago, mobs beat Muslims to death in the streets, even decapitating and dismembering some. While sectarian clashes have left at least 100 people dead over the last two months, in recent days Bangui has been relatively free of gunfire.

Many hope that the pope’s message of peace and reconciliation can encourage longer-term stability in this nation of 4.8 million.

Samba-Panza told reporters Saturday that the pope is being welcomed as a “peace messenger.”

“Many Central Africans hope that the messages he will deliver will inspire a national mobilization and realization that Central Africans learn to accept each other again, learn to live together again and learn to go toward peace and reconstruction of their country,” she said.