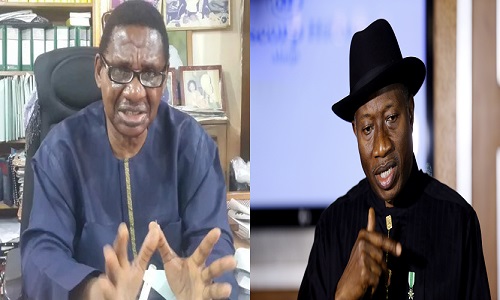 Former President Goodluck Jonathan has carpeted prominent Professor of Law and renowned civil rights activist, Itse Sagay, SAN, over a statement that he (Jonathan) should confess his involvement in the $2.1 billion arms deal scandal before he is arrested.

Jonathan faulted Sagay over the statement, saying that as a respected learned scholar, he should know that suspects are not tried on the pages of newspaper or via social media until they are found guilty by a court of competent jurisdiction.

The former president in a statement issued by a former Minister of National Planning under his administration, Dr. Abubakar Sulaiman, stated that, “one should expect the re­spected learned scholar to know that you don’t hang a suspect on the pages of newspaper or via social media until he or she is found guilty by a court of competent jurisdiction”.

Professor Sagay, who is also chair­man of the Presidential Advisory Committee on Corruption, had in a recent interview he granted an online news medium, ad­vised Jonathan to secretly confess all he knew about the scandalous $2.1 billion arms deal, to which his name has been linked, to President Muham­madu Buhari.

He stated that if ex-President Jonathan heeds the advice, he may be accorded the respect due to him by virtue of being a former Nigerian leader.

Sagay, however, pointed out that the case of the former president being arrested relating to the arms scandal is a “sensitive one”, adding that his concession of defeat following the outcome of the March 28 presidential election, does not make him a hero, as one good action could not correct several evil deeds.

But the former minister said the statement credited to Prof Sagay that tended to vilify former President Jon­athan on the ongoing arms scam, is not only unfortunate but, unprofessional.

“Accordingly, even where the learned jurist feels passionate of such a sensitive but sensational issue, he should know the right route to the vil­la rather than taking such prejudicial position.

“It is high time our legal luminaries confined themselves to the noble eth­ics of their profession than toeing the path of some mischief politicians.

“And we pray that when the report of his Committee finally comes out, it will reflect and incorporate the noble principles of rule of law, fair hearing and impartiality so as to meet the ir­reducible minimum standard expected in matters of this nature. We also pray that it may not end up dashing, rather than raising the hopes of average Ni­gerian in the vintage APC fashion, as with most things these days”, he stated.