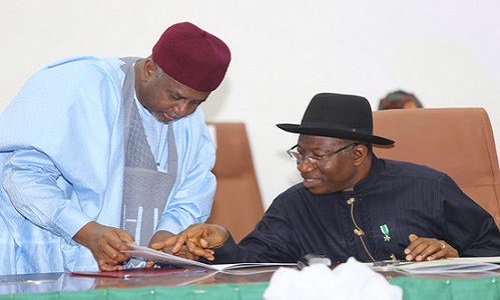 A former Minister of National Planning in the immediate past administration, Dr. Abubakar Suleiman, has said that former President Goodluck Jonathan did not plan to lose the Boko Haram war as is being suggested by President Muhammadu Buhari.

The Minister made the clarification in response to an interview the president granted the Hausa Service of the British Broadcasting Corporation, BBC, last week.

In the interview, Buhari insinuated that his predecessor deliberately provoked Nigerian soldiers into mutiny by its actions, yet, turned around to arrest and prosecute the soldiers.

He also said the past administration, while fighting terrorists, sent soldiers to the battlefield without the proper equipment to effectively wage the war.

President Buhari, who was expatiating on the rot his administration uncovered during investigations into the activities of the immediate past government, disclosed that instead of procuring arms and ammunition for the soldiers, funds meant for the equipment were shared by government officials.

He said, “We investigated and discovered how funds that were pencilled down for arms procurement were diverted and shared by government officials who served the last administration.

“The government at that time sent the soldiers to the battlefield without arms and ammunition to prosecute the war. That was what led some of them to mutiny. They were arrested and detained because of this”.

Mr. Suleiman, however, said ex-President Jonathan tried to protect the constitution, which had had sworn to uphold when he assumed office.

Suleiman said the former president did everything within his power to defend the sovereignty and territorial integrity of the country.

“No responsible government would strategise to lose a war. President Jonathan had sworn to defend Nigeria sovereignty and territorial integrity and he did everything possible to achieve that height in the fight against the insurgents”, a text message by Suleiman said.

“It is unfair therefore for Mr. President to perceive such efforts by his predecessor as criminal and treasonable.

“The President should, in an attempt to build this country, make such pronouncements that will further unite us as a people than that those that would divide us. Posterity will judge everybody”.