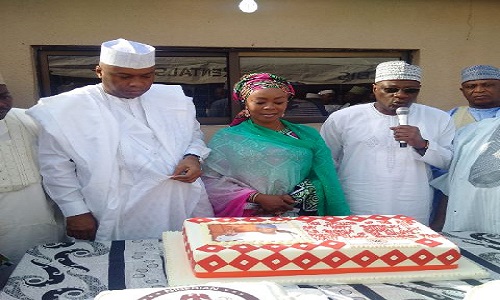 The administration of President Muhammadu Buhari is committed to making lives more bearable and comfortable for the Nigerian masses, the Senate President, Dr Bukola Saraki has stated.

Speaking on Saturday in Ilorin, the Kwara State capital during a special prayer to mark his 53rd birthday today, December 19, which is exactly two days after the president’s 73rd birthday, Saraki assured that the All Progressives Party, APC, led federal government will continue to formulate economic policies that would be beneficial to all.

He hinted that the coming year would witness the actualization of lots of transformational economic policies that would be beneficial to all, even as he urged Nigerians to be patient with the Buhari administration.

Saraki also declared that the Senate under his leadership will be committed to better socio- economic development of the country.

The Senate president, who spoke with reporters shortly after the prayer session held at his Ilofa, GRA residence in the state capital, Senate President Saraki said the day did not call for celebration because of the global economic situation affecting the country.

“As I said, the general challenging situation globally, in the country, and in the states did not allow for celebration. We have great challenges ahead as a country. So, we have to dedicate ourselves to improving the situation for the common good”, he said.

Mr. Saraki, who called for support of all Nigerians in the task ahead, said the legislature was more committed to serve people towards realization of collective aspirations and goals.

He also commended the people of Kwara State for their unflinching support since his emergence as the Senate president, promising to do everything within his means to ensure that he did not disappoint them and indeed Nigerians.

The special prayer, which was led by the chief imam of Ilorin, Shaykh Mohammed Bashir, also had in attendance the popular Islamic cleric, Shaykh Al-Misklin Onikijipa, as well as Governor Abdulfatah Ahmed; Speaker of the Kwara House of Assembly, Dr. Ali Ahmad; Senator Dino Melaye, and some members of House of Representatives and House of Assembly.