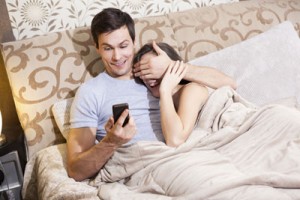 Should you be worried that his past will come back to haunt you?

Is your new boo still fretting over his old flame?

It’s definitely not easy to get over an ex. It’s even harder to move on and start over with someone new.

What’s worse, the longer you were with an ex, the tougher it is to remove them from your life, and it can cripple your new relationships.

You can’t truly be with another person until you’ve moved on from the last one. If your ex still owns a piece of your heart, how can you give it to your new love interest?

That’s why it’s important to spot the warning signs of a man who hasn’t put his past behind him. You don’t want to waste time with someone who can’t give you their all.

And the reason you have to learn to spot these clues is because few people will ever admit to being hung up on an ex — whether it be pride, ego or self-delusion. You certainly don’t want to have him play games with you while you just wait around for him to get back with his ex.

Here are 5 telltale warning signs that he’s still looking at his ex-girlfriend in the rearview mirror, instead of looking at the road ahead with you.

The break up has been official for less than a month.

Love isn’t a switch that you turn off and on. If he was in love with her, it will take time to release the mental, emotional, and physical bonds of love. Right after a break up, there is typically a period of push-pull time, where the previous partners resist the urge to be pulled back together, if for nothing else than habit — it’s what they are used to.

If you enter his life during this time, you end up in the middle of a love triangle in his head and it won’t feel good. So if your new beau is freshly single, go slow until he’s had plenty of time to let go.

His mood is unstable.

As you well know, most breakups suck. Even if you’re convinced you don’t belong together, you’re still in for an emotional roller coaster that involves swinging between a new sense of hopeful freedom and the sadness of loss. So beware if he seems hot then cold. Ditto if he goes from clingy to distant. All are signs that he’s got more healing to do and isn’t yet ready for real romance.

He frequently mentions his ex.

Is his head filled with thoughts of only you? It should be. But if his ex comes up in conversation a lot or he uses “we” when referring to her, it’s a sign she’s still taking up important real estate in his mind. A big red flag? He leans on you for support about his relationship with his ex! Nothing is a more sure sign that someone is not ready to date than these signals that she’s still not far from his mind.

Hey, it’s ok to stay friendly with your ex if that works for both of you. But beware if he still sees or talks to her frequently. More than occasional contact with an ex is a clear sign that part of him is still wrapped up in their connection. After a breakup, as you remodel your sense of identify from duo to solo and build new support systems, the ex’s importance should gradually recede into the background. If she’s still in the foreground, there’s no room for you!

He hasn’t learned his lessons.

Does he still seem bitter about his ex — blaming her for everything, without seeing his own role in the difficulties? If so, he hasn’t gotten enough emotional distance to have learned his lessons from this relationship which means he’s apt to make the same mistakes with you! When a guy can calmly share why his last partnership fizzled and explain what he would do differently in the future, he’s ready to give it another try with a greater chance of success