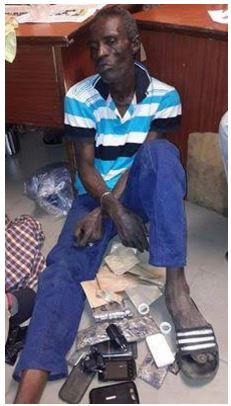 A 54-year-old man, Michael Bisa, who is an expert in swindling members of the public by disguising to be selling a mobile phone, was arrested by operatives of the Rapid Response Squad (RRS). He was arrested along Oshodi-Apapa Expressway over the weekend at about 17:50 hours when the police suspected his movement on sighting him. Items such as fake phones, key soap cut to size, shirts, sum amount of money, packet of envelopes and cut to size cartons were recovered from him.

He is a native of Delta State and confessed to the crime. He claimed that it was poverty that led him into the act of defrauding innocent public. He explained the tactics that he uses to swindle his victims under false pretense, “What I usually do is called Exchange. My prospective victims will have the mind of buying handset from me but unknowingly to them I would have changed the real handset to soap wrapped with cut to size carton put inside an envelope. I will engage them in discussion after showing them real phone initially, and in the process of bargaining for the price, I will change it with the aid of white handkerchief to fake phone. And I will tell them to keep the phone inside their pockets immediately that people are watching us…. He narrated further”, As soon as they left the spot, I will change my clothe to another for uneasy recognition in case he discovers the trick in miles away that he has been duped.”The suspect, who had fathered four children from three different women, further explained “I was a refrigerator technician in Uvwie LGA, Effuru in Delta State. I came to Lagos to look for greener pastures about 15 years ago, but my expectations were dashed when situations got so hard for me in the center of excellence. I met one guy then, Hakeem Tijani, he is late now, and he was the one that introduced this act of stealing to me. Since that time, about 4 years ago now, this act of stealing has been my only source of livelihood… My first wife taught me how to smoke all sorts of hard drugs including cocaine. She died sometimes ago from the complications she suffered due to much intake of hard drug”, he said.

The Police Public Relations Officer (PPRO), Deputy Superintendent of Police, DSP Joe Offor, warned the general public to be weary of individuals and shops where they purchase their mobile phones in order not to fall victim of con men. The suspect was charged to court immediately.