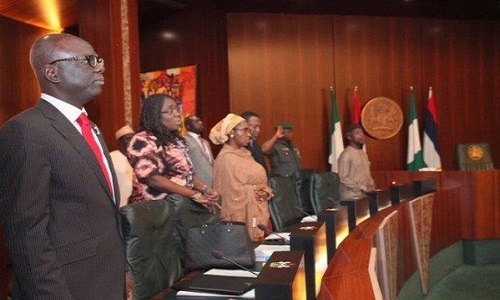 The Federal Government yesterday said the balance of the Abacha loot stands at $26m and £19 million.

The announcement was made at the end of the National Economic Council (NEC) meeting, presided over by Vice President Yemi Osinbajo at the Presidential Villa in Abuja.

The late military dictator, General Sani Abacha, is believed to have looted over $5 billion from the nation’s treasury during his stint as head of state from 1993-1998.

The issue of the Abacha loot came to the fore recently when it emerged that former Minister of Finance and Coordinating Minister of the Economy, Ngozi Okonjo-Iweala, gave approval for the withdrawal of $300m and £5 million from the loot’s accounts to former National Security Adviser (NSA) Col. Sambo Dasuki for arms purchase.

Accountant-General of the Federation, Alhaji Ahmed Idris, gave the figure in the accounts – as of last month – yesterday at the NEC meeting.

“So that is where we are as at today”.

The Benue governor also said the Accountant-General briefed the NEC on the remittances of naira equivalent of foreign exchange remittances made into some revenue generating agencies, adding that the incidents were further being looked into.

Gov. Ortom said the practice was not allowed and that the Federal Ministry of Finance was working out the details, which would be forwarded to NEC.

Also speaking, Taraba State Governor, Darius Ishaku, said the Accountant-General informed NEC that the excess crude account stood at $2.26 billion and yielded an interest of $599.14 million as at November 2015

“The Accountant General of the Federation reported to council that the Excess crude account stood at $2.257 billion as at the end of November 2015.

“He also reported a slight change against the previous balance with an interest, which is due of $599,137,467 into the account as accrued interest”.

Governor Aminu Tambuwal of Sokoto State said Central Bank of Nigeria, CBN, Governor Godwin Emefiele, briefed the council on the updates in policy measures being adopted by the government to stabilise the economy.

He said the drop in oil price caused a lot of pressure on the foreign reserve, which stood at $29 billion.

Tambuwal said the CBN chief added that the apex bank reduced the cash reserve ratio from 25 per cent to 20 per cent.