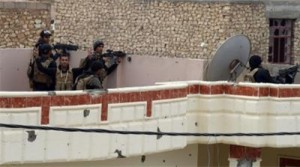 Army officials in Afghanistan say 21 soldiers have been killed by the Taliban in Helmand province during the last 48 hours. Fighting between Afghan soldiers and the Taliban has been particularly heavy around the town of Sangin, which is under Taliban control. Helmand is a traditional stronghold of the Taliban and a major centre for opium that US and British troops fought for years to control. Aljazeera reports:

The US army had conducted air strikes on Wednesday to back up Afghan forces mobilising reinforcements to relieve dozens of security forces holed up in the district centre. Zabiullah Mujahid, Taliban spokesman, said fighters had overrun the whole of Sangin, pinning down Afghan forces in a military base where trapped soldiers reported dire conditions. “Our men are hungry and thirsty,” Abdul Wahab, a local police commander in Sangin, told AFP news agency.

“Stepping out to get bread means inviting death,” he said, adding that dozens of his comrades had been killed and critically wounded. At least four districts in Helmand have slipped into Taliban control, badly denting hopes that Afghan security forces would be able to fight on alone after international forces pulled out last year. However, Abdul Samad, Afghan army sergeant, told Reuters news agency that soldiers were able to fight back the Taliban in Nad-e Ali, where fighters had cut off water supplies for local residents.

“They only use civilians as tools and attack our soldiers but we hit them back. They have also cut off water supplies for local residents in this area,” Samad said. Alarmed by the Taliban advances, Britain has sent extra personnel to NATO’s Resolute Support advisory mission in Helmand in a bid to help struggling local forces. Officials have not confirmed reports that special forces are present and they insist that the mission is there to advise and will not take part in combat operations.