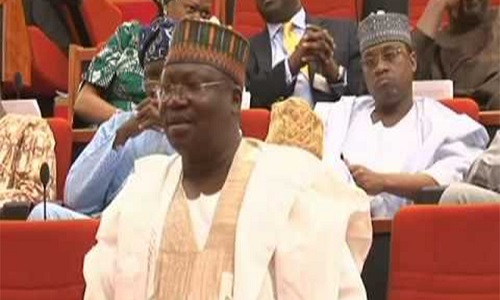 After six months of keeping mum, the All Progressives Congress anointed candidate for the position of Senate President, Senator Ahmed Lawan, on Tuesday broke his silence on the floor.

A third-term senator, Lawan (APC/Yobe North) made his voice heard for the first time since June 9, when he lost the Senate President seat to Senator Bukola Saraki, during a debate on the Medium Term Expenditure Framework (MTEF) transmitted to the red chamber by President Muhammadu Buhari yesterday.

It was gathered that he spoke for eight minutes with his colleagues paying rapt attention to what he had to say.

According to Sen. Lawan, it was a miracle that Nigeria survived the 2015 elections despite the prophecies of doom and tension.

“It is a miracle that the country survived it”, he said.

He also said the $38 per barrel crude oil benchmark template adopted by the federal government to drive the 2016 budget was realistic.

Lawan also rallied Nigerians to support President Buhari to deliver what he tagged as “the goodies of change”, adding “this is a new dawn for Nigeria”.

“This is a budget for the emancipation of Nigerians who are denied good things in the last 16 years. Under this budget, our pupils will get free meals”, he said.