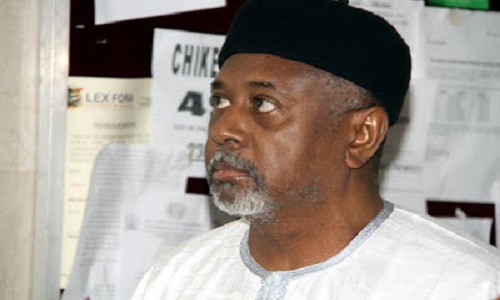 Dasuki was docked ‎alongside the erstwhile Director of Finance in the Office of the NSA, Mr. Shuaibu Salisu, former Executive Director of the Nigeria National Petroleum Commission, NNPC, ‎Aminu Baba-Kusa, as well as his companies, Acacia Holding Limited and Reliance Referral Hospital Limited.

‎The accused persons, who EFCC investigations showed illegally diverted over N13.6billion from the national treasury, pleaded not guilty to the entire charge.

‎The EFCC alleged that it was the accused persons that supervised the unlawful disbursement of billions of Naira from different bank accounts belonging to the office of the NSA.
‎
The funds were allegedly distributed on the orders of ex-President Goodluck Jonathan to delegates that attended the Presidential Primary Election the Peoples Democratic Party, PDP held in Abuja.

The EFCC further alleged that the sum of N13.570 billion, being money for an “agreement” between Dasuki and the ex-Director of Finance in the office of the NSA, Salisu, was looted from the national treasury.

They were said to have transferred a total sum of N1.45b to Acacia Holdings Limited’s account for special prayers; N2.1b given to DAAR Investment and Holding Company Limited for publicity; N170m for a four-bedroom duplex; N380m to support re-election of members of the House of Representatives; and N750m paid into Reliance Referral Hospital Limited’s account for special prayers.

Besides, EFCC said its investigations revealed that N670m was paid to Publisher of Thisday newspapers, Nduka Obaigbena; N260m transferred to former PDP Board of Trustees Chairman, Chief Tony Anenih and N345million traced to a former President of the Senate, Sen. Iyorchia Ayu.

The Commission said it has not been able to trace the former Special Assistant on Domestic Affairs to Jonathan, Hon. Waripamowei Dudafa, who it said was “on the run”.

After listening to their not guilty plea, the trial judge, Justice Hussein Baba Yusuf‎ adjourned till Tuesday to hear the accused persons’ separate applications for bail.