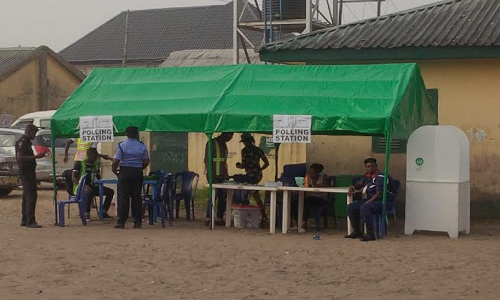 The Minister of Transport, Rotimi Amaechi, and Minister of Defence, Mohammed Dan Ali, have been accused of leading the plot to rig the Southern Ijaw local government area governorship re-run election in Bayelsa State.

This allegation was contained in a statement issued yesterday by the coordinator of the Peoples Democratic Party Governors’ Forum, Osaro Onaiwu, in Yenagoa, the Bayelsa State capital.

In the statement, Mr. Onaiwu alleged that the former Rivers governor and Defence Minister met in Abuja this past week to fine tune strategies on how to sway the election in favour of the All Progressives Congress governorship candidate, Timipre Sylva.

The result so far announced by the Independent National Electoral Commission, INEC, shows that Sylva is trailing the incumbent Governor and PDP candidate, Seriake Dickson, by over 33,000 votes.

Dickson also won in six local government areas while his challenger claimed victory in only one.

Southern Ijaw, where the election was rescheduled for a yet-to-be announced date, has the largest voter-strength in the state and is considered a stronghold for the APC as its chairman, Chief Tiwei Orunimigha, Sylva’s running mate, Chief Wilberforce Igiri and Minister of State for Agriculture and Rural Development, Senator Heineken Lokpobiri, all hail from the area.

Onaiwu, however, stated that APC is in a desperate bid to capture the oil-rich state, which is in line with the suggestion by Governor of Sokoto State, Aminu Tambuwal, who was reported to have said all oil-producing states should be taken over by the APC in the interest of national security.

The statement reads: “It is on good authority that the Minister of Transport, Mr. Rotimi Amaechi has held two meetings with Mohammed Dan Ali, Minister of Defence, on how the military can once again be used to intimidate voters and rig the Bayelsa poll for the APC in Southern Ijaw local government in the rerun election for the Bayelsa governorship.

“It would be recalled that the PDP Governors Forum had raised alarm before the inconclusive poll that there were plans by the APC to camouflage as the military to abuse the process in their desperation to capture oil-producing states under the PDP.

“Today we have been vindicated by several reports of independent observers and the bold move by the INEC to reject Southern Ijaw local government poll.

“From what we know, the threat to use the military to perpetrate heist of the mandate of the electorate of Southern Ijaw and by extension all Bayelsans still remains as Ministers Amaechi and Dan Ali remain the arrow head of the planned theft of the votes of Bayelsa people through intimidation, fake military personnel and doctored voters cards manufactured in Port Harcourt by Indian IT mercenaries imported by the APC”.

While calling on the security agencies to remain neutral and non-partisan in the forthcoming re-run, the PDPGF coordinator enjoined the people of the state to reject any attempt by any group or individuals to hijack their right, and vote for the candidate of their choice.