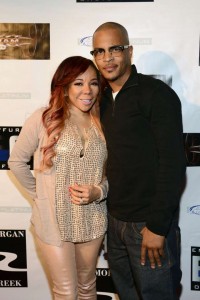 Veteran American rapper and actor, Clifford Joseph Harris aka T.I, and wife Tiny have announced that they are expecting a new member to their family soon.

Tameka “Tiny” Cottle revealed this via an Instagram video where she wished fans a Merry Christmas, thanked her husband for the stunning necklace and earrings he got her, before showing of her adorable baby bump with a red bow on it.

“Merry Christmas! Thank you to my family for my wonderful gifts…But most of all thank you for our new heir to the throne. This is the best Christmas gift you could’ve ever given me.” She says in the video.

This latest addition to the Harris family will be the couple’s third child together after Clifford “King” Joseph Harris III and Major Philant Harris.

In March 22, 2007, Tiny had given birth to a stillborn baby girl six months into her pregnancy, whom they named, Leyah Amore Harris.

The rapper himself has two sons, Messiah Ya’Majesty Harris and Domani Uriah Harris, and a daughter, Deyjah Imani Harris from previous relationships.