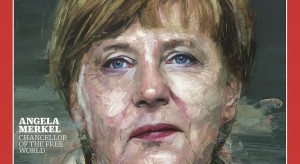 Time Magazine has named German Chancellor Angela Merkel as its “Person of the Year”. The magazine cited her role in Europe’s crises over migration and Greek debt. Mrs Merkel had provided “steadfast moral leadership in a world where it is in short supply”, editor Nancy Gibbs wrote.

Ms Gibbs wrote of Mrs Merkel: “For asking more of her country than most politicians would dare, for standing firm against tyranny as well as expedience and for providing steadfast moral leadership in a world where it is in short supply, Angela Merkel is ‘Time’s Person of the Year’.”

Citing the refugee and Greek economic crises, along with the Paris terror attacks, Ms Gibbs said: “Each time Merkel stepped in. Germany would bail Greece out, on her strict terms. It would welcome refugees as casualties of radical Islamist savagery, not carriers of it.