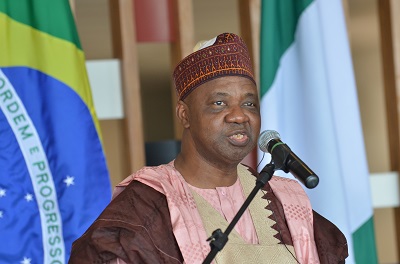 As the Economic and Financial Crimes Commission, EFCC, continues to dig deep into how the $2.1 billion arms deal funds was spent by the Office of the National Security Adviser, ONSA, Sambo Dasuki, a former Accounts Officer II, Ibrahim Idris Wambai has alleged that the Office of ex-Vice President Namadi Sambo was on a monthly stipend of N20million from the ONSA.

The accounts officer also fingered several presidential aides and firms as beneficiaries of the slush funds from the ONSA.

Records of all cash payments to such individuals and organizations are still intact, Wambai claimed in a statement of Witness/Accused Person which was filed by the EFCC in the High Court of the Federal Capital Territory on Friday.

The certified statement on oath is part of the Proof of Evidence for the trial of nine suspects next week.

He said: “In December 2014, I took cash of N4million to Col. Madaki (rtd) in his residence in Wuse II Abuja. I had made many cash payments to Doyin Okupe, Ahmad Idris (PA to ex-NSA), ADC to former First Lady Patience Jonathan as payments for monthly operation allowances.

“The documents showing evidence of the payments are in the office of Yazidu Ibrahim in cash payment files. The exact amounts paid and date of payments I cannot remember but are available in the files.

“I also witnessed several payments in cash to various people. Prominent was about payment of N300million to former Chairman on Security and Intelligence, Dr. Bello Matawalle from the cash in the strong room.

“To get details of cash payments in Naira and individuals and organizations summary and vouchers from January 2011 to July 2015, the documents are kept in Yazidu Ibrahim’s former office. These should be collected from the Director of Finance and Administration, Col. Jafaru Mohammed. I and Yazidu Ibrahim can supply the files and the summary”.

The accounts officer also mentioned the names of five firms allegedly used for questionable transfers from the ONSA.