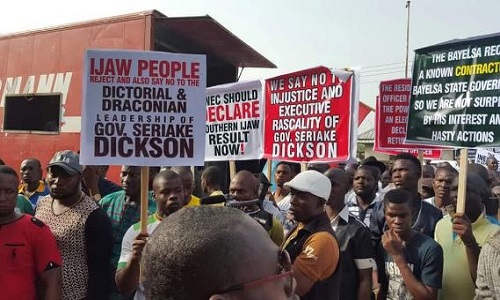 Some youths supporting the All Progressives Congress, APC, in Bayelsa State on Wednesday marched through the streets of Yenagoa, the state capital, demanding the announcement of election result in Southern Ijaw local government area.

The Independent National Electoral Commission, INEC, on Monday canceled the rescheduled election in the area amid allegations of violence, voter intimidation, ballot snatching and abduction of electoral officials among other electoral malpractices.

With results announced in the other seven LGAs of the state, INEC was forced to declare the election inconclusive pending the conduct of election in Southern Ijaw, which is the largest LGA in Bayelsa State.

Despite warning by the Bayelsa State command that it would not condone any form of protests, rallies or march in the state by any group of persons, the APC youths held various placards with inscriptions such as “INEC should declare Southern Ijaw result now”, “We say no to injustice and executive rascality of Gov. Seriake Dickson”, “Ijaw people reject and also say no to the dictatorial and draconian leadership of Gov. Seriake Dickson”, “The INEC REC in Bayelsa State should be sacked”, among others. 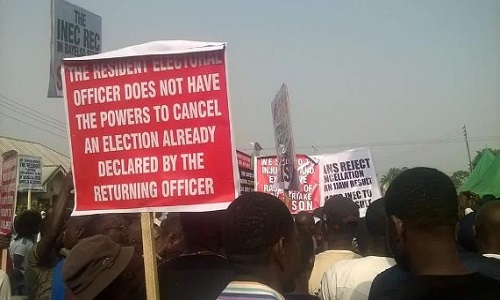 On Tuesday, the APC candidate in the election, Timipre Sylva, through his campaign outfit, Sylva/Igiri Campaign Organization, also rejected the cancelation of election in Southern Ijaw, stressing that the Resident Electoral Commissioner in the state did not have the power to cancel an election whose results were already trickling in.

He accused the REC of bias and having sympathy for the Peoples Democratic Party, PDP.