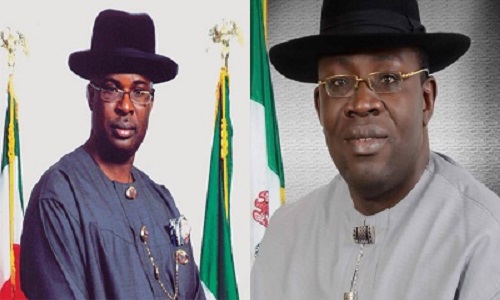 IGP Arase and Prof. Yakubu gave the assurance in Yenagoa, the state capital, when they met with stakeholders in the election and to address issues surrounding the poll.

The duo also stopped briefly at the police command headquarters in Yenagoa, and left for a stakeholders’ meeting involving all the parties in the election at Otiotio area of the state capital.

Speaking to journalists before leaving the command, the INEC boss said everything was set for the Saturday poll and urged voters to come out en masse to cast their votes for their preferred candidates.

According to Yakubu, the INEC had released about 52,000 voter cards generated from the last continuous voter registration exercise to the state Resident Electoral Commissioner (REC) for onward distribution to their owners.

The INEC chair said he was in the state to speak with the stakeholders and reassure them of the readiness of the commission to conduct a free, fair and credible election.

He also used the occasion to dismiss claims of the use of federal might to influence the polls, adding that INEC would provide level playing field to all parties involved in the election.

“INEC is fully prepared. We have come to speak with the stakeholders. On November 10 all the parties and their candidates signed the peace accord. I am happy that they are abiding by the terms of the peace accord.

“We have come to speak to them and to also reassure all Bayelsans that nobody but Bayelsa will elect a governor for Bayelsa State. They should come and cast their votes freely. The elections will be free and fair.

“The election is two dimension, the responsibilities that INEC will discharge and the responsibility entirely for the police and that is why we have come with the chief internal officer of the country, the IGP to speak and assure Bayelsans that we will create enabling environment for free, fair and credible election.

“All the PVCs for continuous voter registration had been transferred amounting to over 52,000. They have arrived Bayelsa and we have handed them over to the REC this morning. We will find the most effective means of distributing the PVCs”, he said.

Speaking in the same vein, Mr. Arase said the police force is ready to ensure a violent-free poll, adding that the police remain neutral in the electoral process.