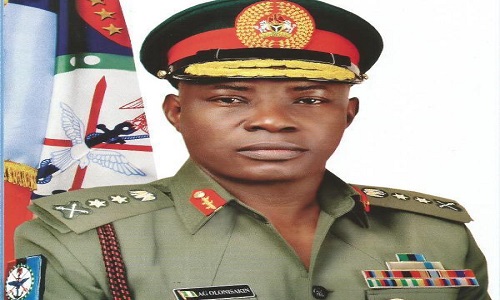 The Chief of Defence Staff, General Gabriel Olonisakin, has disclosed how female suicide bombers deceive unsuspecting members of the public requesting assistance to perform religious obligation to enable them gain access to soft target, before they detonate their Improvised Explosive Devices, IEDs and killing innocent citizens.

The CDS explained that the female suicide bombers approach their victims, asking for water to perform ablution and other favours, in a bid to enter designated areas and detonate their bombs.

Consequently, General Olonisakin has warned the civil populace to be suspicious of such strange females asking for water for ablution or any other favours, stressing that the deceptive plan is calculated to enable the suicide bombers gain access to designated areas to carry out their dastardly act.

Recall that the female suicide bomber in Maiduguri on Monday used a similar tactic to gain access to a soft target – a family residence – where she detonated her IED, killing at least 13 people, mostly members of the family.

In light of the foregoing, the Defence Chief advised citizens of the country to be wary of the latest tactics of the terrorists to perpetuate their evils acts, especially in Mosques, Churches, market places, motor parks and other social gathering.

General Olonisakin spoke at the occasion of end of year 2015 conference with Principal Staff Officers of the Defence Headquarters yesterday.

Meanwhile, General Olonisakin has effected a restructuring of the Defence Headquarters, with the establishment of the office of Campaign Planning, Coordinating Centre for Naval Component, Theatre Commander and Deputy Theatre Commander in Operation LAFIYA DOLE.

Also, a new ‘Theatre Media Office’ has been established to coordinate the operational activities of the Armed Forces.

He said that the Theatre Media Office will interface with the media and general public in the North East.

A statement signed by Brigadier General Abubakar Rabe, Director of Defence Information, said: “The restructuring, according to the CDS, became expedient in order to inject new tactics, operations and robust initiatives to attain efficiency and professionalism in the major operations nationwide where rule of law and human rights are strictly adhered to”.

The CDS reaffirmed his commitment to an indivisible Nigeria, stating that the military will continue to fight for the unity of our dear country. He stressed that Nigeria remains one nation with one destiny.

Gen. Olonisakin maintained that the Armed Forces is working round the clock in the fight against terrorism, illegal oil bunkering, cattle rustling and other forms of illegalities and crimes that are bedeviling the nation.