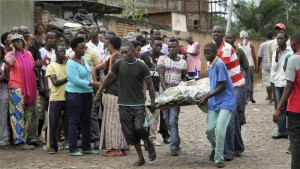 At least 87 people were found dead in Burundi’s capital Bujumbura on Saturday, a day after the government said an unidentified group carried out coordinated attacks on three military installations. Burundian army spokesman Colonel Gaspard Baratuza said eight security officers were among those killed during and after Friday’s attacks.

“The final toll of the attacks yesterday is 79 enemies killed, 45 captured and 97 weapons seized, and on our side eight soldiers and policemen were killed and 21 wounded,” Baratuza was quoted as saying by the AFP news agency.

A climate of fear has engulfed Bujumbura after the sound of battle could be heard throughout Friday and sporadic gunfire overnight. Residents hid in their houses leaving only security personnel patrolling the streets. “So far the violence has been political,” reported Al Jazeera’s Mohammed Adow, adding that it has sparked “fears that civil war in Burundi could be rekindled”.

“There is a police operation that is continuing in the suburbs of the capital,” he said, explaining that young men have been the primary target. An eyewitness told the Associated Press he counted 21 bodies with bullet wounds in their heads in the Nyakabiga neighbourhood on Saturday morning. Some of the dead had their hands tied behind their backs.