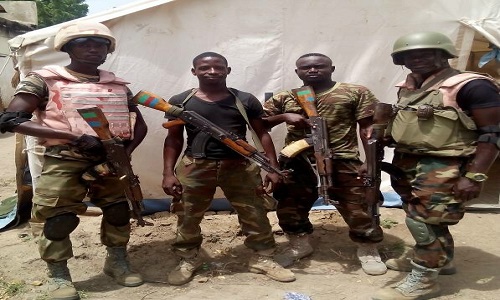 The Defence Headquarters on Friday announced a restructuring of the Operation Lafiya Dole in the North East, which it said was aimed at repositioning it for more efficiency, effectiveness and combat readiness in the discharge of its assigned tasks of crushing the remnant of Boko Haram Terrorists.

Subsequently, a new Theatre Commander has been appointed, the Director of Defence Information, Rabe Abubakar, has said.

Umoru is succeeding Yusha’u Mahmood Abubakar, a Major General, who was appointed four months ago.

The Defence Headquarters was silent on why Maj.-Gen. Abubakar was removed within a short space of time.

Also appointed is the Deputy Theatre Commander, who is Major General Lucky Irabor.

According to Mr. Abubakar, a Brigadier General, “The changes are part of the reorganisation by the Defence Headquarters in line with the force restructuring of its operations to attain the overall objectives of the Chief of Defence Staff.

“The aim of this new development is to restrategise and inject new tactics to the existing operational procedures with the aim of finally knocking out the terrorists who now devised means of hitting soft targets through suicide bombings and isolated attacks on remote villages.

“Operation Lafiya Dole will continue to be responsive until all elements of terrorists are finally crushed”.