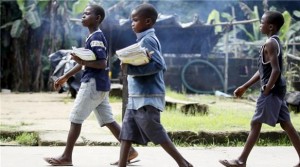 An estimated one million children have been forced out of school as a result of violent attacks by Boko Haram in northeastern Nigeria and its neighbouring countries, a new UNICEF report said on Tuesday. The ongoing violence has led to the closure of more than 2,000 schools in Nigeria, Chad, Niger and Cameroon, the agency said. Hundreds of others have been attacked, looted or burned by Boko Haram, whose name roughly translates to “Western education is forbidden”.

“The conflict has been a huge blow for education in the region, and violence has kept many children out of the classroom for more than a year, putting them at risk of dropping out of school altogether,” said Manuel Fontaine, UNICEF’s West and Central Africa regional director. Fontaine said the “staggering” figure of one million children out of school increased the risks of them being “abused, abducted and recruited by armed groups”.

Children have been particularly targeted by Boko Haram and have often been the victims of sexual abuse, forced marriage, abductions and brutal killings. Terrified and traumatised, many families are keeping their children away from classes.

“A lot of parents in the northeast would not send their children to school because they’d be afraid of what would happen,” Hafsat Maina Muhammed, executive director of the Choice for Peace Gender and Development NGO in Damaturu, told Al Jazzera.