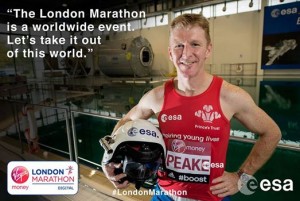 According to Dr. Jonathan Scott of the Space Medicine Office at the European Space Agency treadmill running is a routine and important part of living in space. “It’s essential that astronauts stay fit and healthy to counter the effects of living in microgravity,” he said. “If Tim did no exercise when he arrived on the ISS, he could lose as much as a quarter of his aerobic capacity after just two weeks of the mission.”

While exercise is common on the space station, the length and intensity of a full marathon can present some unique difficulties. One such difficulty comes from the harness that Peak will be required to wear throughout his run. “One of the biggest challenges I’ll be facing is the harness system,” Peak told BBC News. “In microgravity I would float if I didn’t strap myself down to the treadmill, so I have to wear a harness system that’s a bit similar to a rucksack.”

Dr. Scott explained that the harness can become uncomfortable after about 30 minutes, far less time than it typically takes to complete a marathon. Peak completed the marathon on earth in 1999 with a time of three hours and 18 minutes and in 2007 United States astronaut Sunita Williams completed the Boston Marathon while in orbit with a time of four hours and 23 minutes.